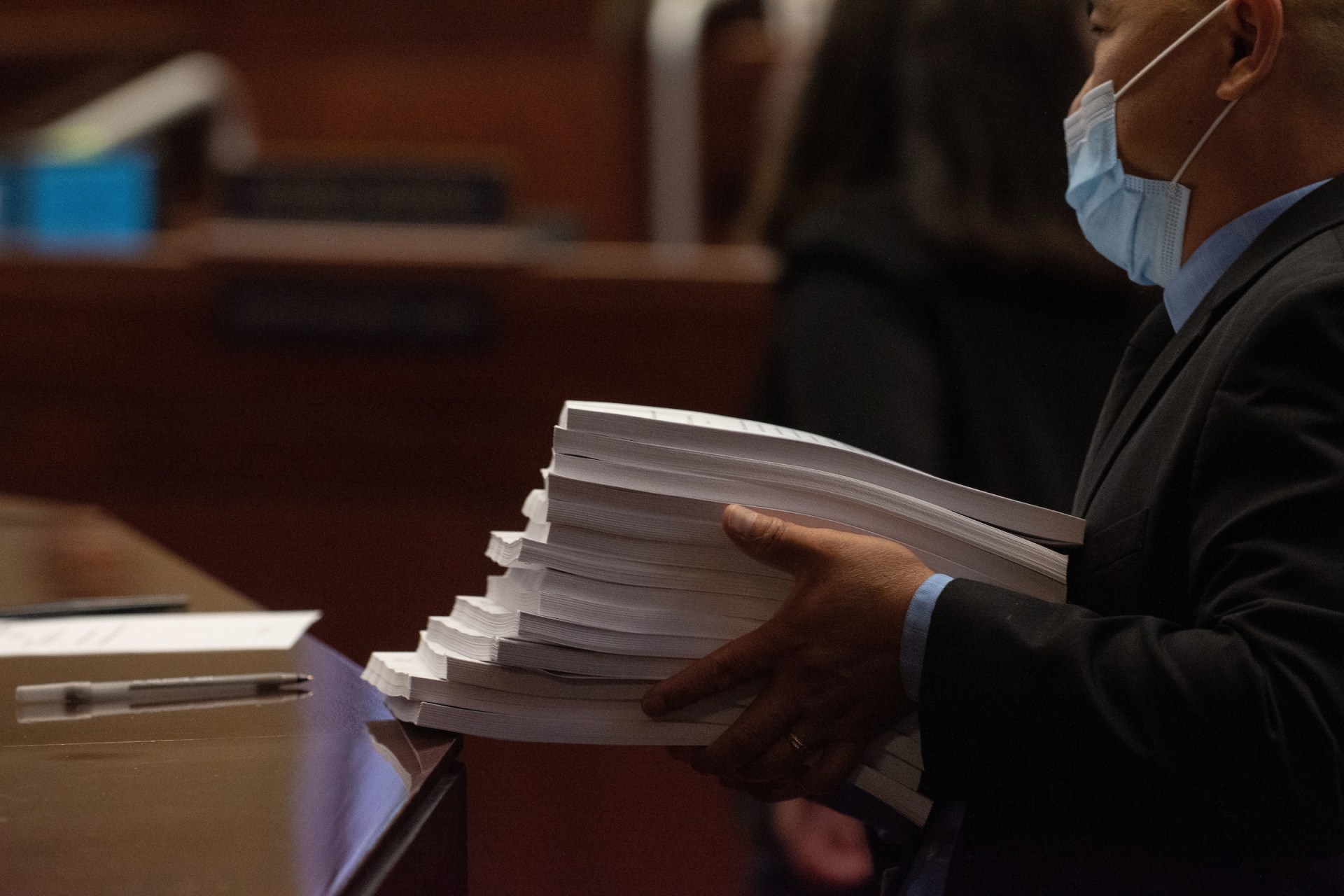 A Nevada Assembly Sergeant at Arms passes out a bill draft request during a recess on the second day of the 31st Special Session of the Nevada Legislature in Carson City, Nev., on Thursday, July 9, 2020. (David Calvert/The Nevada Independent)
Share
0
FacebookTwitterPinterestLinkedinTumblrRedditWhatsappTelegramEmail

CARSON CITY, Nev. (AP) — Nevada lawmakers on Thursday were more than a day into their emergency legislative session, but with a $1.16 billion revenue shortfall in front of them, the only choice they had made was to order meals for Friday and to keep deliberating.

Gov. Steve Sisolak convened the state’s part-time Legislature on Wednesday to rebalance the budget as coronavirus continues to decimate the state’s economy and tax revenue.

Republicans and Democrats have spent most of the first two days of the session asking state agencies and finance officials to provide more information on proposed cuts to the Department of Health and Human Services and Department of Education.

Under Nevada law, any proposal to increase taxes requires two-thirds approval in both the state Senate and Assembly. Democrats clinched a two-thirds supermajority in 2018, but fell one seat shy in the Senate.

If Democrats propose a tax increase to safeguard funding for schools or Medicaid reimbursements for speciality care, they will need to swing one Republican vote in the Senate.

Gov. Steve Sisolak’s proposal would balance the budget without any tax increases, but in a fiscal report released Monday, he said he would be open to signing one into law if the Legislature put it on his desk during the special session.

The bills introduced by the Senate and Assembly thus far have not included tax increase proposals. Lawmakers have introduced proposals to defer capital improvements and collect taxes on the state’s mining industry early as they’ve gathered more information on proposed cuts to health care and education.

If passed, the governor’s proposal would use a combination of reserve funds, federal relief dollars and targeted cuts to compensate for a projected $1.16 billion revenue shortfall. It would require state agencies to furlough workers one day each month and revert $70 million from agencies back to the general fund. It would protect the Distributive School Account but reduce funding for K-12 education — including for programs that support literacy and career development — by $157 million and for higher education by $110 million.

It would cut $233 million from the Department of Health and Human Services through cutting funding for mental health programs, limiting services and reducing reimbursement rates for Medicaid recipients, and other measures.

In a late-night press conference on Wednesday, Senate Majority Leader Nicole Cannizzaro, D-Las Vegas, and Assembly Speaker Jason Frierson, D-Las Vegas, did not give a timeline on when they expect votes to occur. Frierson said the session would last “as long as it takes.”

Although neither Cannizzaro nor Frierson indicated whether they personally backed tax increases, Cannizzaro said Democrats and Republicans had been in discussions over alternatives to budget cuts.

“If we’re going to talk about any revenue in the Senate, Democrats cannot do that by ourselves,” she said.