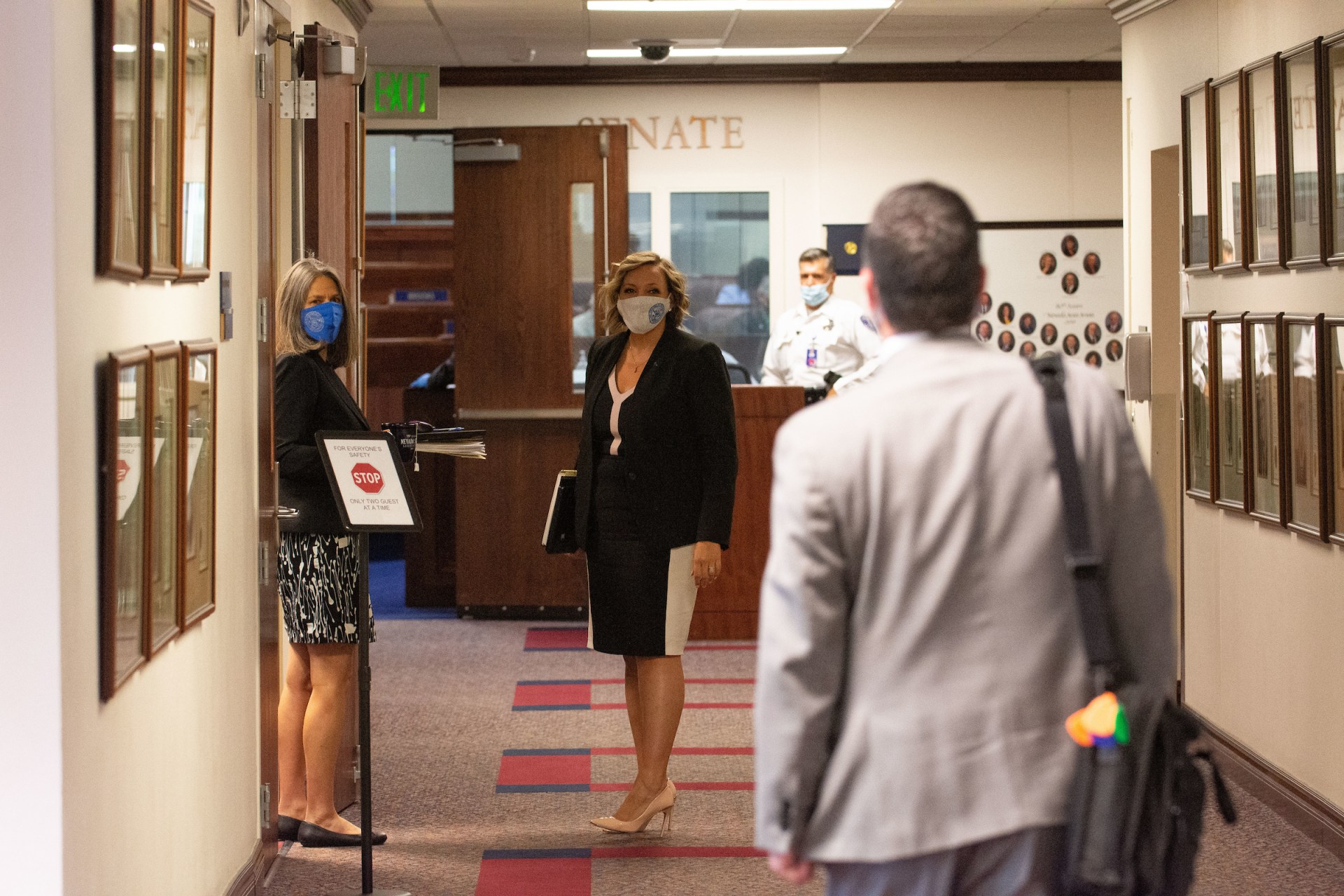 Nevada Assemblyman Steve Yeager, right calls out to State Senators, Nicole Cannizzaro, center, and Julia Ratti, left in the hallway outside the Senate chambers on the sixth day of the 31st Special Session of the Nevada Legislature in Carson City, Nev., on Tuesday, July 14, 2020. (David Calvert/Nevada Independent)
Share
0
FacebookTwitterPinterestLinkedinTumblrRedditWhatsappTelegramEmail

With a budget deal nowhere in sight, both the state Senate and Assembly passed a resolution Tuesday urging congressional leadership and President Trump to provide funding to allow the state to avoid making cuts to health care and education that both parties say would be hard to stomach.

It was the only vote taken in both chambers on the sixth day of Nevada’s emergency legislative session.

Testifying in favor of the resolution, Assemblyman Howard Watts, D-Las Vegas, said the fate of the state budget lies largely in Washington, where Democrats and Republicans have sparred for four months over aid to state and local governments.

“We need flexible relief to help us meet our budget challenges and we need it now,” Watts said.

Watts said painful cuts to state-provided services in Nevada could be avoided if U.S. Sen. Majority Leader Mitch McConnell, a Kentucky Republican, considered the Health and Economic Recovery Omnibus Emergency Solutions Act passed two months ago by the House. It would provide state and local governments a total of more than $1 trillion in additional assistance.

State Senate Majority Leader Nicole Cannizzaro, D-Las Vegas, has called on McConnell to pass the bill since the start of the session.

“You think about the state of Nevada, a billion dollars is something that would literally change the conversation in terms of what we’re talking about taking from the budget,” Cannizzaro said on the first day of the session. “That’s such an enormous number, but it’s such a small number in comparison to so many other states.”

Speaking in favor of Tuesday’s resolution, Cannizzaro amplified her earlier pleas to McConnell to keep the relief legislation from languishing.

Nevada Assembly Minority Leader Robin Titus, R-Wellington, and Senate Minority Leader James Settelmeyer, R-Minden, didn’t agree with Democrats that McConnell and Trump were to blame. Both legislators voted in favor of the resolution and acknowledged the need for flexible funding amid the pandemic. Titus praised Trump for already offering a combined $13 billion in aid to Nevada since the onset of the pandemic.

In addition to federal dollars, Republicans say the Legislature needs a clearer picture of the balance that remains in various state agency accounts. On Monday evening, after five days of the special session, they blasted Gov. Steve Sisolak for a “lack of transparency” and said questions posed to finance officials and agency heads have yet to be answered.

U.S. Rep. Mark Amodei, R-Carson City, voted against the most recent aid measure passed by the House and believes the U.S. Senate will pass its own relief package soon.

As lawmakers deliberate over a series of hundreds of sweeps and deferrals to balance the state budget, Amodei, who previously served in the state Legislature, wants to make sure a clear, apolitical plan is in place to distribute federal dollars to cities, counties and school districts regardless of their size.

“We want to know what it is county-by-county so that we can make the best possible case for making sure that the squeaky wheels get the grease and not the political wheels,” he said.