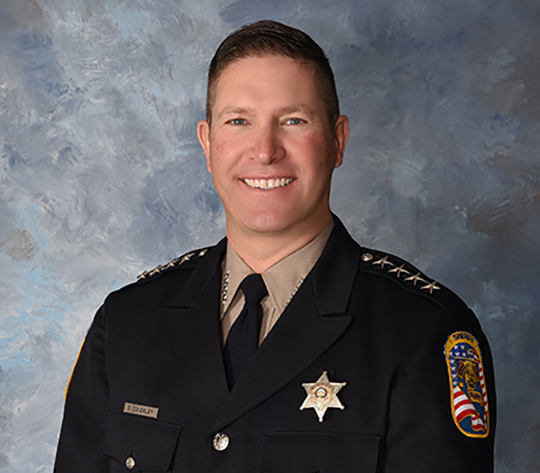 This story was originally published on ThisisReno.com

MINDEN–Douglas County Sheriff Daniel Coverley sent a letter Tuesday, July 27, to the Douglas County Public Library Board of Trustees that’s making waves within the community and beyond.

The letter was also published on the DCSO website under “news.”

In it, Coverley criticizes the board for its support of the Black Lives Matter movement and ultimately tells the library and its staff, “Due to your support of Black Lives Matter and the obvious lack of support or trust with the Douglas County Sheriff’s Office, please do not feel the need to call 911 for help.

“I wish you good luck with disturbances and lewd behavior, since those are just some of the recent calls my office has assisted you with in the past.”

The Douglas County Public Library Board of Trustees intended to hold a meeting on July 28 during which they were to discuss a proposed diversity statement mentioning Black Lives Matter. The meeting was canceled.

Coverley—who has been a member of the DCSO since 1997 and sheriff since 2019—wrote in the letter that the “tragic and preventable death of George Floyd at the hands of four Minneapolis Police officers shined a national spotlight on bad actors within the law enforcement profession” but, nonetheless, “data simply does not support claims that law enforcement is systemically racist or structurally biased.”

Much of Coverley’s missive plagiarizes a June 22, 2020 letter by multiple state attorneys general to U.S. house and senate leaders.

The letter compared civilian deaths at the hands of police officers to the assault and deaths of police officers, noting that in 2019 there “were nine fatal shootings of unarmed black persons (down from thirty-eight in 2015) and nineteen fatal shooting of unarmed white persons (down from thirty-two in 2015),” also saying “those deaths represent 0.1% of all black homicide victims and 0.3% of all white homicide victims.”

He compared this to “recent weeks of national unrest,” writing that, “750 officers have already been injured defending their communities from the violence that has swept our country. Two members of law enforcement have already lost their lives.”

“Numerous Black Lives Matter protests have resulted in violence, property damage and the closing of local businesses, sometimes permanently,” Coverley wrote. “To support this movement is to support violence and to openly ask for it to happen in Douglas County.”

This Is Reno reached out for statements from the Douglas County Library Board of Trustees, the Nevada Sheriffs’ and Chiefs’ Association and the DCSO.

We did not hear back from Douglas County Public Information Officer Melissa Blosser prior to publication of the story. However, Eric Spratley, Executive Director of the Nevada Sheriffs’ and Chiefs’ Association—a professional, social, non-profit association for law enforcement agencies in the state—commented on Coverley’s letter.

“‘Please do not feel the need to call 911 for help,’ Spratley said, reading from the letter. “Yeah, that’s a pretty drastic statement there. I would direct any comment on that, as to what he’s thinking, back to him. Things become passionate on both sides of this argument. And people choose to react the way they’re going to react.

“So, I’m not giving the sheriff a pass or commenting on his comment or judging his comment—but if you go to the other side of the matter, the Black Lives Matter website, it does say, ‘The police don’t keep us safe,’ and they call it a corrupt criminal justice system—and that’s troubling,” Spratley added. “For people to support that thought process is troubling for law enforcement because we’re trying to be involved in our communities.”

Spratley went on to add that it is troubling “when people are burning City Hall in Reno, tagging up the police station there when you’ve got leadership at the Reno Police Department that is actively engaged with underserved communities,” trying to have dialogue with people of color and their leaders.

“In Nevada we’re really trying to do our best to make sure we’re inclusive and not one-sided, and we proclaim that we reject discrimination toward any person,” he said. “That’s what we believe as an organization.”

Spratley acknowledged that, “it seems like that letter could be a little bit frustrating,” but said he had no knowledge of what had been said or done by the Douglas County Library Board of Trustees to prompt its writing.

This Is Reno called Coverley for comment. His Public Information Officer, Jeff Schemenauer, said the sheriff was busy for part of the afternoon and the letter “speaks for itself.”

However, a short time later, DCSO issued another media release walking back Coverley’s statements. The second post noted that DSCO “will continue to respond to all 911 calls, including those at the Library.”

In the statement, Coverley is quoted: “My response to the Library’s proposed agenda item was to provide public comment about their proposed diversity statement and to further provide open commentary about how this could affect our local law enforcement profession.”

Wesley Juhl, communications manager for the Nevada ACLU chimed in on the matter on Twitter, linking to the original letter and writing, “First of all, this is just a library district trying to be inclusive, but this would be monstrous no matter who it was. Police have a sworn duty to protect everyone.

“Also, Black people are 21.91x more likely to be arrested for marijuana possession than white people in Douglas County, which has the largest racial disparities in Nevada.”

In that tweet he linked to an ACLU research report examining racial disparities in marijuana arrests across the country between 2010 and 2018.

A plagiarized section of Coverley’s letter notes “only 2% of people who had any contact with police anytime in the prior twelve months said that officers used or even threatened to use force against them.”

Coverley in 2003 was one of those officers. Coverley and another law enforcement officer found themselves embroiled in an excessive force lawsuit surrounding the 2001 arrest of a Gardnerville man. Douglas County eventually settled this lawsuit.

Before becoming sheriff last year, Coverley told the Record Courier that he’d received a one-day suspension as a result of the incident during which he was videotaped grabbing a man and lifting him by the neck.

Video footage of the incident was obtained and aired by CNN, and has since been shared by others on YouTube.  It shows then 27-year-old Gene Jordan handcuffed and being choked by Coverley as he’s lifted from the ground.

“To clear up any confusion: For the incident in 2001, I was disciplined and suspended for one day for using an improper lifting technique,” he told the Record Courier. “The incident was investigated for excessive use of force, and I was cleared.”

Reached by phone today, the attorney for Jordan, J. Andre Boles, said the excessive use-of-force case against Coverley was settled out of court.