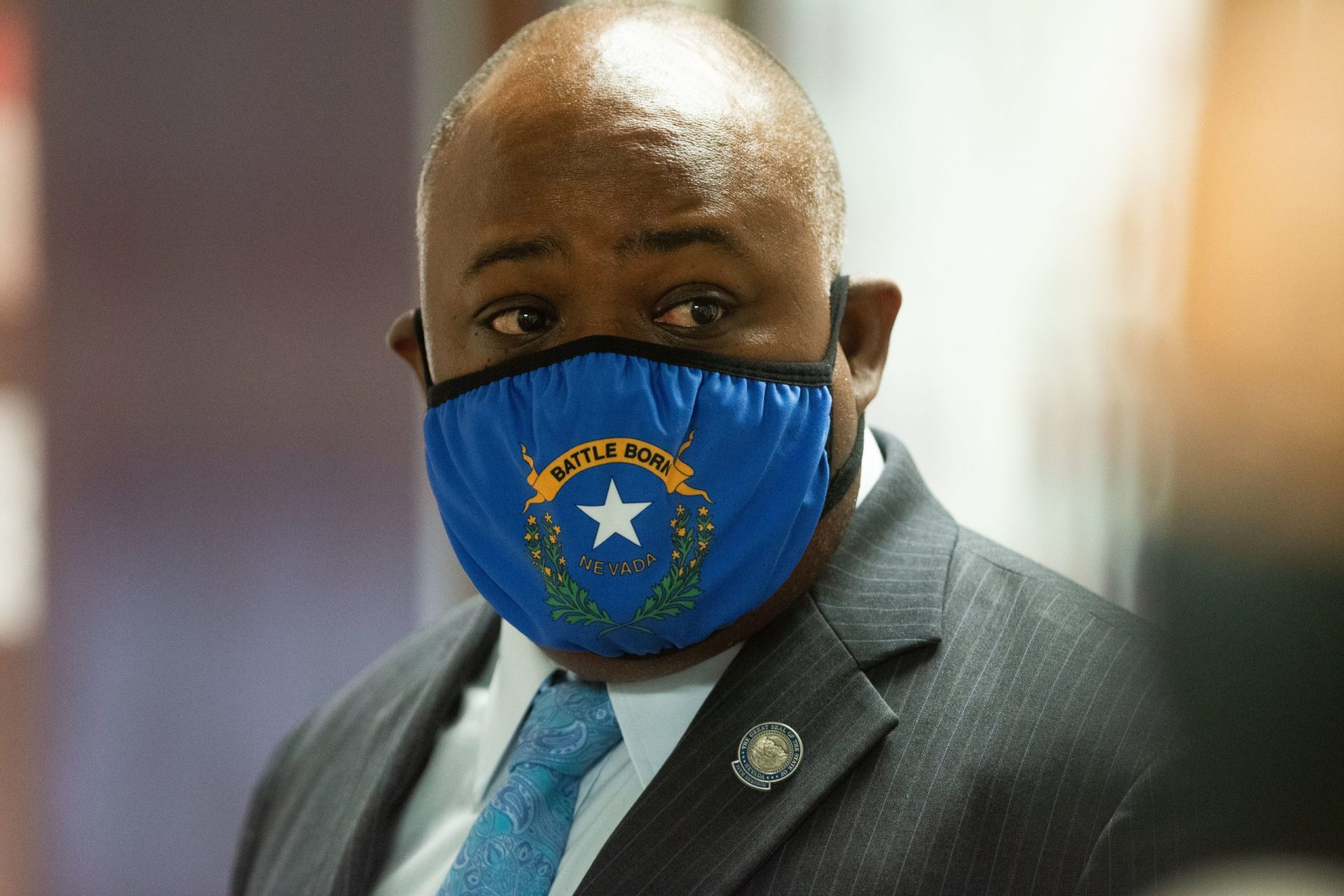 Nevada Speaker of the Assembly Jason Frierson on the third day of the 31st Special Session of the Nevada Legislature in Carson City, Nev., on Friday, July 10, 2020. (Pool Photo by David Calvert/The Nevada Independent)
Share
0
FacebookTwitterPinterestLinkedinTumblrRedditWhatsappTelegramEmail

After starting their hearings late in the afternoon on Friday to consider Assembly Bill 1, which addresses pay cuts and furloughs for state employees, Assembly members listened to lengthy, often emotional public comment from current state employees opposed to the first bill to be put forth by their body during the special session. These are employees facing a mandatory 12-day furlough in the coming fiscal year or a 4.6% reduction in their salaries.

Assembly Speaker Jason Frierson opened public comment by asking if there were callers in support of the bill. There were none.

Callers in opposition to the bill, however, numbered in the dozens. They identified themselves as working in departments across the state.

Some callers spoke of having lost their jobs or taken huge pay cuts during the recession. Some spoke of already mounting bills, including medical bills—noting that they’d likely find themselves in need of the types of public assistance that will be cut from the budget of Nevada’s Department of Health and Human Services. So many mentioned seven total years of merit raises they’ve lost. An angry man talked about losing one house already.

“We’ve been working the whole time and providing services to the families of Nevada. I joined the state during the Great Recession and also participated in furloughs and pay freezes…It’s sad that we know our state has not changed its income [models]” or diversified its revenue sources, she said.

Cedric Williams, who works for the Division of Welfare and Supportive Services, is president of AFSCME Local 4041.

“I hear people talk about us being in a situation where our raises were frozen for five years. It was closer to 10 years we were without a raise,” he said.

During his call, Williams expressed disappointment and disgust that the union was not asked to be at the table for discussions on the cuts. He said state employees who need to put food on their tables and clothes on the backs of their family members should have had a say.

“This has to stop,” Williams said.

William Ledford is not a state employee. He’s director of advocacy at Lutheran Engagement and Advocacy in Nevada. He called in support of state employees and in opposition to AB1.

“These cuts are happening in the places we need the support the most and have given so much already and do so much to support our state,” he said. “We understand this is a hard time and people may need to carry a burden, but the burden should be proportional to what they’re able to carry.”

When opposition callers had all taken their opportunity to speak, Frierson asked if there was anyone who wanted to offer neutral testimony on the bill. There were not.

Legislators question the specifics of AB 1

Many of the concerns raised about AB1 by public commenters had also been shared by assembly members, who brought their concerns and questions to Susan Brown of Governor Steve Sisolak’s Finance Office.

Assembly member Al Kramer (R-Carson City, Washoe County) questioned why some employees, like those in Department  of  Tourism  and  Cultural  Affairs, were exempted from taking furlough while part-time employees are not, and also noted that certain classifications of workers would legally be required to make time-and-a-half pay to make up for wages lost to furlough.

Brown explained that Tourism and Cultural Affairs employees work a standard 32-hour week, eight hours less than full time and were thus exempted. She said employees whose furlough could result in them being required to make time-and-a-half will not be placed on furlough. Instead, they’ll take a 4.6% reduction to their salaries.

Kramer said he did not think this was fair. He said employees who have to take furlough days at least get those days off, while their counterparts who take pay reductions lose equivalent money but have to work their usual schedules.

In May, This Is Reno reported that Nevada’s Division of Tourism laid off eight individuals and the rest of the staff took 30% pay cuts in the form of furlough days, indefinitely.

Assembly member Gregory Hafen (R-Clark, Nye and Lincoln Counties) asked Bryan Fernley of the Legislative Counsel Bureau why pay cuts did not apply to legislators as well. Fernley explained the cuts contained in AB1 applied only to executive branch employees, not those employed in the legislative branch.

Hafen said he felt everyone in the legislative branch should have to take similar pay cuts and was advised that he could seek to do that himself through the proper channels for his branch of government.

Many of the assembly members suggested that furloughs should not be applied evenly to all employees. Assembly member Heidi Swank (D-Clark County) asked why the furloughs could not be spread out across the highest wage earners at the state. Assembly members Daniele Monroe-Moreno (D-Clark County) and Dina Neal (D-Clark) echoed Swanks’ suggestion. They asked that AB1 be put on hold long enough for an evaluation to be done of the different salary classifications of state workers to see if a more equitable furlough schedule could be devised.

Neal noted that state employees at the lowest pay grades only make a little over $13 an hour to begin with.

The Assembly took no action on AB1 on Friday—the day that it was announced there had been a positive COVID-19 test of someone within the legislative building. The body did not meet on Saturday and postponed the continuation of the special session until Monday. The Assembly convened shortly before noon on Monday, with nearly a dozen members participating online via Zoom.