Mayhem at the Mansion: Minutemen protest marches from Capitol 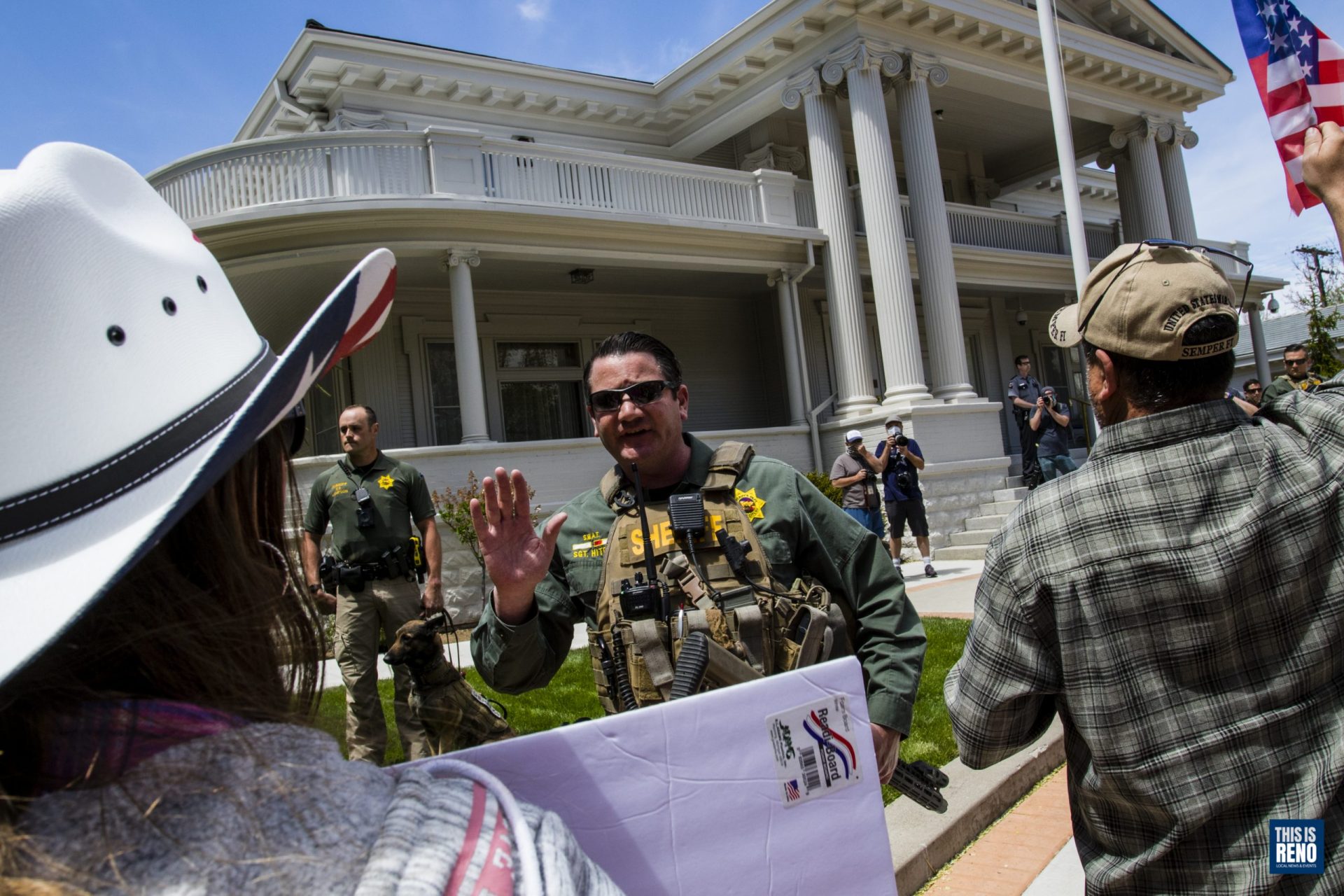 Law enforcement kept back protesters May 2 at the Governor's Mansion during a protest to reopen Nevada and recall Gov. Sisolak. Image: Ty O'Neil
Share
0
FacebookTwitterPinterestLinkedinTumblrRedditWhatsappTelegramEmail

By Ty O’Neil and Trevor Bexon | Images by Ty O’Neil
Republished from ThisisReno.com

Demonstrators in Carson City did something Saturday not often seen in Nevada: they marched to the governor’s mansion in protest.

Billed as “The Return of the Minutemen” on Facebook, the rally drew hundreds of Trump supporters, Proud Boys and self-described patriots to the state capitol to demand Nevada reopen businesses, churches and some recreational activities affected by stay-at-home orders.

Then, they headed a half mile to the mansion’s lawn at 606 Mountain Street where they were met with a heavy police presence.

As the crowd grew, along with the deafening blare of car horns, some protesters began crossing into the fenced yard, even removing the chains marking the property’s boundary.

Law enforcement, including SWAT teams, reacted by bringing out officers in full tactical gear, some with tear gas, pepper ball guns and police dogs. Carson City Sheriff Ken Furlong was also on hand. Unarmed, he spoke with individuals who tried to get closer while his armed officers stayed back.

The angry pack’s boos and screams included accusations that the law enforcement officers were traitors. As protestors encroached within the officers’ six-feet space and hurled verbal abuse, officers pushed back the line of protestors through conversation rather than force, then formed a line around the building.

Reno attorney Joey Gilbert was also at the event, seen calming the crowd and pushing them back. Gilbert is leading a group of doctors suing Nevada Governor Steve Sisolak and the Board of Pharmacy for his ban on the use of hydroxycholorquine for treatment of COVID-19.

Gilbert hosted a Zoom conference April 29 that included participants from “Liberate Nevada,” who posted on their Facebook page that the attorney’s team is considering a federal civil rights case against the governor and what they say are his “draconian measures.”

Protesters began to ease up until they caught wind that the governor may have been leaving out the side exit. Tensions escalated again as law enforcement blocked protestors from accessing the mansion and reaching a set of large SUVs.

While it was never confirmed that Gov. Sisolak was in one of the vehicles, protestors used a megaphone to voice their displeasure regardless.

Celebration before the storm

Tempers had yet to flare when the protest began at 11 a.m. The mood was celebratory, and protestors were clearly exuberant to have their voices heard about their wide-ranging feelings of COVID-19 and the state’s subsequent response. Many signs showed the opinions questioning the seriousness of the ongoing pandemic.

The majority of protestors lined up on Carson Street in front of the Capitol Building with American flags, signs and Donald Trump gear. Other protesters decorated their vehicles and drove the stretch of road in parade fashion, honking their horns and waving to the people on the streets.

Some protesters had speakers they used to rally the crowd with chants of, “USA! USA! USA!” or “Lock him up!” and “Dictator,” in reference to Sisolak.

The feeling of being at Trump rally, without Trump being there, was apparent. The flags, hats, shirts, and gear being sold on every corner had Trump plastered everywhere.