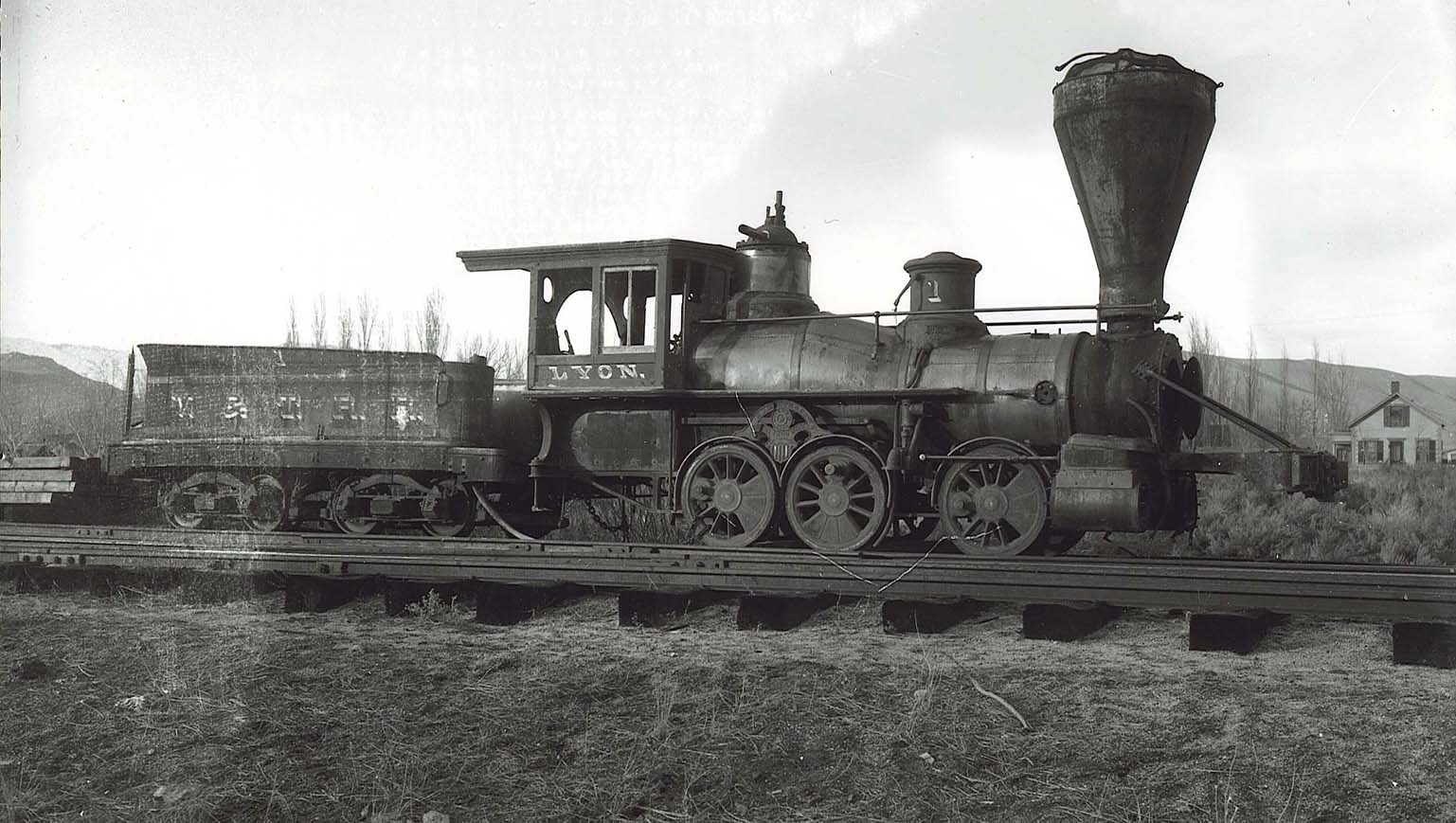 Historical photo: The Lyon locomotive – the first one ordered and used by the Virginia & Truckee Railroad in in 1869 – sits on tracks in Carson City in the late 1800s. The locomotive was scrapped in the late 1890s. Photo courtesy of Nevada State Railroad Museum.
Share
0
FacebookTwitterPinterestLinkedinTumblrRedditWhatsappTelegramEmail

CARSON CITY – The old saying that legends never die might also be said about old locomotives.

Many of those iron horses, long lost to time or the scrap heap, live on through historic photographs, artwork and the hearts and minds and skillful hands of railroad buffs.

That is certainly the case with the “Lyon,” the first locomotive constructed for the fledgling Virginia & Truckee Railroad in 1869 – V&T No. 1 – 151 years ago at the Union Iron Works in San Francisco. It was delivered in pieces by wagon to Carson City and assembled on the depot grounds next to the Carson City Mint.

After recording several “firsts” for the railroad – the first on the tracks, the first to cross Crown Point Bridge, the first to reach the Comstock – the Lyon soon became one of many locomotives as the Comstock boomed and the V&T expanded. By 1879, it had been rendered obsolete by newer and more powerful V&T locomotives and eventually wound up rusting away outside the V&T Engine House in Carson City before being scrapped by the late 1890s.

Fast forward 100 years to the mind and heart and skillful hands of V&T Railroad buff Stan Gentry. For the past 25 years, Gentry, of Clear Lake, Iowa, has been overseeing the building of a full-sized replica of the Lyon – all 22 tons of it – with the intent that it would eventually go to the Nevada State Railroad Museum in Carson City.

“When I began the process of building it over 25 years ago, I had always imagined that it would have a permanent home in Carson City, Nevada and the museum,” said Gentry, who is President of the Mason City & Clear Lake Electric Railroad Historical Society, Inc.

On Monday, March 2, Gentry’s wish came true as the Lyon arrived on the grounds of the Nevada State Railroad Museum and became part of the museum’s second-to-none V&T Railroad collection. The Lyon will be the fifth V&T Railroad locomotive in the museum’s collection, joining the No. 18 Dayton, No. 22 Inyo, No. 25 and No. 27. The museum also has multiple box cars, passenger cars, cabooses and other rolling stock that served on the V&T Railroad.

The Lyon arrived Monday via truck with the locomotive’s cab, chimney and cowcatcher disassembled for transport purposes. It was first unloaded onto the museum’s turntable and then pulled into the restoration shop. There is still significant work to be done to make the Lyon fully operational, but those involved with the project expect it to move forward at a faster rate with the locomotive in Carson City.

Chris DeWitt, supervisor of restoration at the museum, has been a longtime consultant on the project and helped design a number of elements.

“Essentially, I was one of the many small contributors to the project focusing on the specialized areas I was familiar with,” DeWitt said. “There remains a lot of work to complete the locomotive and I hope to be involved for the foreseeable future.”

Other volunteers at the Nevada State Railroad Museum have also helped on the Lyon project and long to see it reach fruition. The hope is the required work can be completed in time for the 150th anniversary of the completion of the V&T Railroad in 2022.

Gentry said he has mixed feelings about letting the Lyon go, but is upbeat about its future.

“I am sad to see the Lyon leave Clear Lake, Iowa, but I am very pleased to know it is going to Carson City for completion,” Gentry said. “The restoration shop at the Nevada State Railroad Museum in Carson City will do the best job possible completing the locomotive.”

Any donations to complete the Lyon project can be made to museum or Friends of the Nevada State Railroad Museum, Carson City. Just earmark Lyon project.